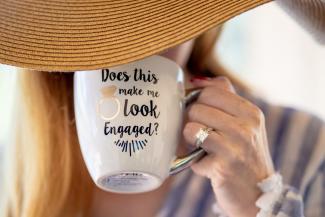 It has been 5 years in the making, and I have been dropping not-so subtle hints for a solid 3 of them, so I am super excited to tell you that I’m engaged! My (now) fiancé John proposed on Christmas morning. 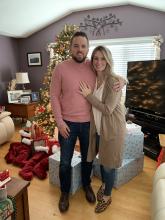 him images of rings to his work email, personal email, mobile device and any active social media account for the last 3 years. I am typically very good at picking up on any hints, and I suppose that’s why I didn’t think it was going to happen when it did. Here is how it went…

At approximately 7am on Christmas morning, John woke me up saying it was time to open presents. I begged him to please let me sleep for a bit longer. Request denied- so I got up.

Alexa was asked to play Christmas music. I was given a cup of coffee and we exchanged Christmas gifts. I knew every single one of my gifts because I had accidently opened them when they were mailed to the house thinking they were my deliveries, so everything was going as expected on my end.

When exchanging gifts was over, he commented that I had blown through all of my gifts pretty fast, and lucky for me there was one more present on the Christmas tree. Every year, John gifts me a Christmas ornament, so I thought he was too lazy to wrap it and instead had hung it on the tree. So I am looking and looking, and I can’t find the new ornament… which resulted in having to play ‘hot or cold’.

After a straight minute of being told “HOT!!” while blankly staring at the tree, I asked for a hint. I was still confused and sleepy, so he offered that “maybe it is on something”. So then began my search of looking for an ornament on top of another ornament, while still being told “HOT!!.” Nothing. Then, I saw it! And I was SHOCKED! He had put the ring around the ear of a bunny ornament. John then proposed traditionally on one knee while “You’re a mean one, Mr. Grinch” played in the background. I had to ask him later if I had even replied yes, I was so stunned!

A few developments have occurred since the proposal. 1- I learned that Alex and John knew the whole time, my John had asked for their input and advice, to which they were super helpful and kept the secret for several weeks. 2- We have tentatively already set a date for August 28, 2020 at The Duxbury Maritime School. We both want to get married in the late summer/fall and incorporate the ocean in some way and so far things seem to have fallen into place.

If you have any suggestions for anything wedding related, please share, I am all ears!